Guest Blog–If No One Knows, No One Cares: An Urgent Message for President Biden

“This is the wake up call of #Moonshot4Kids: medical research investment into cures for children is one area where our priorities as Americans are completely upside-down.”–Janet Demeter

This is the story of Moonshot4Kids meets the White House Moonshot! 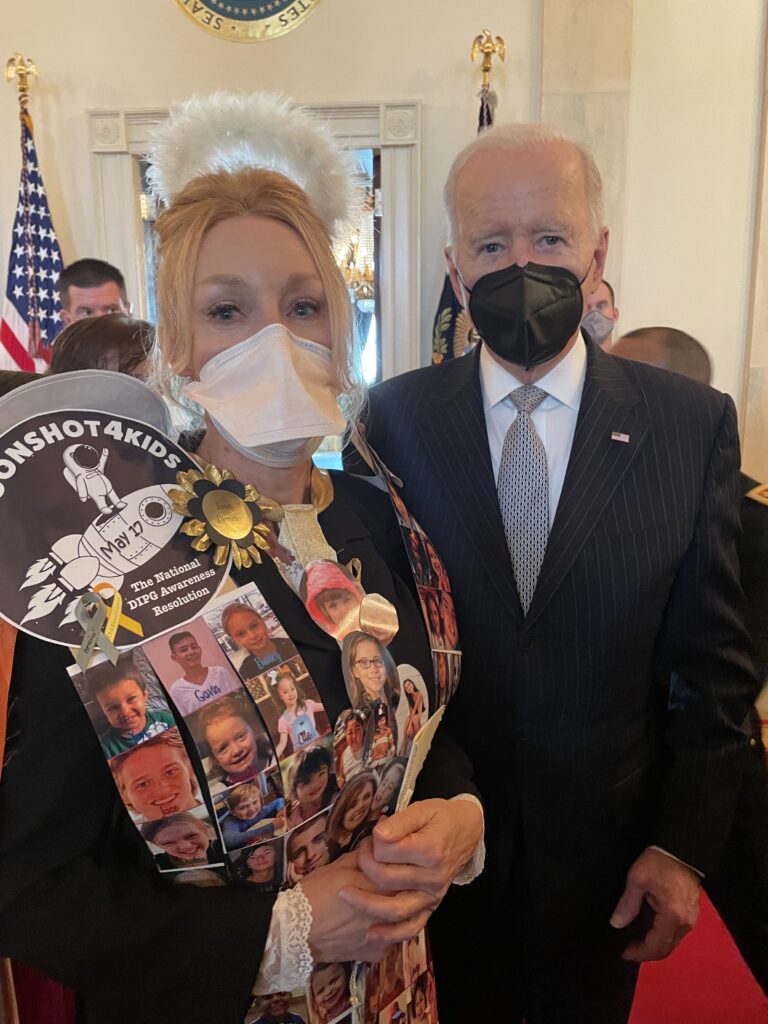 I visited the White House on Feb. 2, 2022 to witness President Biden’s announcement to reignite the Cancer Moonshot.  I never expected an invitation to this event.  At the end of last year, I had been involved in a White House OSTP roundtable of stakeholders in the childhood cancer community at the end of last year.  When I was asked not to share about the participants and content of the roundtable until after “the announcement,” I had no idea I would have the honor of being invited to this event.  I had focused my attention on relaying the message to the President that children and childhood cancer needed more prominence in a new Cancer Moonshot.  Childhood cancer remains the #1 cause of disease-related death in children in our country.

My three-year-old son Jack was diagnosed with DIPG, diffuse intrinsic pontine glioma, in October of 2011.   Most of the 400 families whose child receive the same diagnosis each year are like me.  They can’t conceive that their precious child has arguably one of the deadliest childhood diseases.  Virtually all of its victims die; it is one of the world’s most rapacious killers of children, yet it is virtually unknown to the public.

I didn’t realize until after Jack had died in July of 2012 that brain tumors lead in childhood cancer deaths, or that DIPG was actually not a ‘very rare pediatric brain tumor.  DIPG is the 2nd most commonly diagnosed brain tumor in children and is responsible for the majority of childhood brain cancer deaths, a significant portion of the annual childhood cancer death toll.  When Jack was diagnosed, I was told it was so rare that we might have been struck by lightning twice.  Now that I know better, I scoff at such nonsense.

My activism on behalf of children with cancer, children with brain tumors, and children with DIPG began in 2014.  I started running for awareness with signs and angel wings to visibly symbolize DIPG’s fate.  My first activism success came in my home state of California when the state legislature there introduced and passed a resolution for DIPG/pediatric brain cancer.  I also had the chance to attend the newly begun CureFest events in Washington DC that September.  The following two years, I attended the newly inaugurated White House Briefings for Childhood Cancer under the Obama Administration, advocating for childhood brain cancer research and DIPG visibility.

It dawned on me, congregating with hundreds of advocates for CureFest, that with DIPG we have a powerful opportunity to raise awareness for all children who are suffering without hope of survival, or relief.  Neil Armstrong’s daughter Karen died of DIPG in 1962; today in 2022 we are presented with the same standard treatment protocol and terminal prognosis.  Yet, with 1960s technology, we sent Americans to the moon and brought them home safely because we had a strong national resolve.   Together, we can do anything!

But, if no one knows, no one cares, and no cures come quickly enough. This is the inspiration for DIPG Awareness Day, #Moonshot4Kids.  Amid St. Jude’s commercials and the billions we invest in NIH, people don’t realize the neglect of pediatric disease research funding. Pediatric brain cancer, one of the leading causes of childhood mortality in the United States, is one of the least-funded areas of cancer research by the federal government and private sector. Much the progress we’ve made in childhood brain cancer research in the last ten years has been paid for by bereaved parents and parent-led foundations, thanks to social media and our collective outrage.

The “Cancer Moonshot Announcement” event on February 2nd, 2022 at the White House in Washington, DC was attended by members of Congress and philanthropic, industrial, and advocacy leaders. They assembled with excitement and optimism.

First Lady Jill Biden gave the intensely direct and heartfelt opening speech, underlining the President’s commitment to the Cancer Moonshot and the Biden family’s personal experience with cancer and grief.  Vice President Harris gave a moving account of her own personal, tragic losses to cancer, inspiring solidarity in our collective commitment moving forward.  Finally, President Biden gave a powerful speech in which he emphasized his commitment to employ the full power of his office in realizing the ultimate goal of the Cancer Moonshot:  to end cancer as we know it.

It was a beautiful event, and I was very moved, but not once was the word child or children spoken.  Our work on the roundtable effort, the proposals, the painstakingly drafted letters, the hour and a half of testimonials and deliberations, and this is happened.

But I wasn’t surprised!  This is the reality for childhood cancer; we all assume–even the President!–that if we invest in something it will of course trickle down to our children. This is the wake-up call of my efforts with #Moonshot4Kids: medical research investment into cures for children is one area where our priorities as Americans are completely upside-down.  No one really knows this until it directly affects them.  We spend more dollars on potato chips annually than our government invests into childhood cancer.

Then something unexpected happened:  As the event wound down, President Biden noticed the hundreds of pictures draped around my shoulders, my halo, and my #Moonshot4Kids sign.  He walked over and we started talking.  I told him that virtually all of our DIPG children die a horrific death, and if anyone truly needed a moonshot, it’s children with cancer.  I told him I’d been working for six years on the DIPG Awareness resolution (H. Res. 404), now in its fourth iteration in Congress.  He asked me “How many cosponsors have you got?” and I told him of our attempt to gain back and surpass 218 after the near House majority we had last Congress and of needing a supermajority of 290.

I mentioned the planned Congressional Briefing on May 17 for #Moonshot4Kids, and the President instructed his assistant to take my information and follow up.  We also hope there will be a childhood cancer community event for the Cancer Moonshot in September.

It was a great day for kids after all!