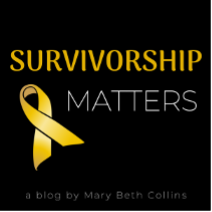 During his teens, my neuroblastoma survivor Joshua was struggling in every way a person could struggle. Puberty had brought on new long term side effects, and reinvigorated old ones that we thought were behind us. His chemo-induced hearing loss progressed from moderate-to-severe to profound, and his hearing aides became a trigger for his migraines. The combinations of cognitive impact, cluster migraines, and chemo-induced ADHD made education almost impossible. He was doing the best he could on home/hospital care with a teacher who visited the house a few times a week. Without appropriate psychosocial support, he was left to make sense of all of this on his own.

Always trying to figure out how I could best support him, I asked him to list for me the top five problems challenging him. I knew what I saw – and there were so many more than five – but I wanted to hear what issues were most pressing FOR HIM. About an hour later he gave me a list. Two were typical teenage problems: something about his girlfriend at the time, and a current battle with his younger brother. Yes, sometimes our survivors are just regular teenagers despite the survivor issues! He listed the cluster migraines, which pretty much robbed him of any quality of life. He mentioned how hard it was to keep life straight, the executive dysfunction was severe and organization of any kind without assistance was almost impossible.  But his number one problem left me speechless: “I can’t dream.” I gently probed, “Honey, do you mean you are struggling with sleep?” His response dissolved my heart, “Mom, all of my friends are busy planning their lives. They are talking about cool trips, great colleges, or starting careers. I barely can get through the day. A person like me doesn’t get to dream.”

What kind of life does a teenager have if he or she can’t dream? It’s the time for self-exploration, self-discovery, and experimentation. When side effects are significant enough to challenge the most basic quality of life, what kind of independence can be developed? My son talked about the pain of watching his friends create lives for themselves after high school. Yet his reality was he didn’t even know if he could graduate on time. Yes, long term side effects may rob survivors the quality of life they deserve – but even more importantly hope for the future is displaced by the struggle of day-to-day living.

Completing treatment gifted us a precarious survivorship. Neuroblastoma relapse was an ominous threat, coupled with the struggle of a multitude of side effects. I simply didn’t dare to think too far ahead. I initially lived appointment to appointment, month to month, test to test, eventually broadening to three months when Josh no longer needed scans to monitor his health.  We settled into a family routine we attempted to maintain, always knowing that side effects could intercede at any point. The GI issues, especially what I termed “flash flood diarrhea,” cluster migraines, and hearing issues were problems that demanded a lot of attention and support. But over a few years, I began to find enough confidence to trust that I could plan farther ahead. I began to think about holidays around the corner, or plan birthday parties earlier. I could purchase a larger size for Josh when clothes went on sale, trusting he’d be around to wear them.

At that time, my boss wanted to begin more strategic planning for my success and professional development. He asked me, “Where do you see yourself in five years?” and I just got lost in the question. His face softened as I tried to explain, “I don’t. I can only really consider about six months. I don’t trust Josh’s life much beyond that.” I wasn’t sophisticated enough to be forward-thinking in one aspect of my life but hold back in others. In retrospect, it is obvious that this limitation affected my career in ways I wasn’t aware at the time. It was later that I realized that Josh was right: I too was unable to dream. I didn’t dare to imagine Josh graduating high school, living on his own, getting a job, or getting married. As a parent with a son of such vulnerable health, neuroblastoma still clutched my heart. How could I allow myself to want something so incredible and risk having it snatched from me by relapse or some other significant side effect. The pain would simply be intolerable. Instead, it was safer -for my head and my heart- to be more pragmatic and stay in the present. I lived within the time frame I was comfortable, albeit cautious. I simply couldn’t ever put myself through the shock of the initial diagnosis again. I could never assume his life as I had the week before he was diagnosed. It simply was easier to be more militant and stay on-the-ready for the next battle, even if the battle didn’t come.

Then hit the pandemic, a time the world stopped and people were housebound. For many, this was tragedy. For Josh, it was healing. He had been struggling to keep up with a small job delivering pizzas and practicing with his band. His side effects were raging, and the executive dysfunction made many things in life challenging for him. Quitting his job and finally having a chance to just focus on his music, his life slowed down and its quality increased tremendously. Over two years, while the world agonized Josh flourished. Most of his side effects subsided, and he began to focus in ways he had never before enjoyed. Executive functions created order in the chaos that had ruled his life. Josh had applied, was accepted, and he completed, an online course with a Grammy-award winning music mixing master. This musician/instructor was so impressed with what Josh could accomplish despite high-frequency, profound hearing loss that he provided him customized instruction where he guided him to see in detail on the computer what others are trained to listen for when doing this work. This program spear-headed the music business he had only casually mentioned he might consider one day. Within one year he had trained for it, created it, and began accepting clients. It took Covid-19 to give my son the best quality of life he has enjoyed in 25 years! But even more importantly, not only is he beginning to dream, but he is living those dreams. He currently is planning on taking his business out of our basement and opening a studio in the area, potentially with three soundproof rooms! The possibilities right now are endless for him, as life and opportunity pave a new path to a promising future.

I enjoy having musicians around, and love to talk with these aspiring artists when taking breaks from sessions. Last week, a new client was talking about Josh’s musical talent and mentorship, grateful to be working with him. He shared how he loves watching him play the drums. I laughed responding, “Can you just imagine him an old man, still pounding on his drum set?” And then my heart skipped a beat hearing what I just said. Sometimes we amaze ourselves with thoughts that make themselves known, not in our minds but by falling out of our mouths. I didn’t realize I was growing comfortable with wanting decades with my son, such a risk for this mother after 23 years of cancer-impacted living. But watching him blossom in confidence, capability, and quality of life has had an incredibly nurturing effect on me. Slowly, I’m continuing to heal from the trauma over far too many years of struggle.

A parent must let go of fear in order to hold dreams dear to one’s heart, and I’ve realized that I did so before I knew I was ready. My comment still rings in my ears, and I notice mindful reflection on it at times when I am sipping coffee in the morning or tending to flowers in the garden. It is the announcement of a new life for us both: a life of hope and confidence in a promising future for great things. Trusting our survivors’ health is no easy task, and we do so at our own pace. Josh, old and gray, rocking out on his drums: it really is such a beautiful dream.